Our Work on Yankee Stadium

Doing refrigerant recovery at the old Yankee Stadium was one of the more fun jobs that we have completed, especially since we are Red Sox fans. We have the distinction of being the only refrigerant company in the world on this jobsite. (Needless to say, they were not thrilled with my Boston accent nor with the fact that I am a Red Sox fan.)Yankee Stadium first opened in 1923 and was subsequently renovated in 1974. This means that there were no set locations for any of the refrigerant and air-conditioning systems and no real blueprints to show the location of anything. Over the years, as things changed and upgraded, air-conditioning and cooling systems were added as needed. They were installed wherever there was enough space. We found units behind walls, on top of beams and rafters, above the seating, hidden above ceiling tiles and just about everywhere else you could fit one. Our job became a search-and-find mission, and, with no lighting in many areas, it was quite the challenge. We enjoyed every minute of it.Ultimately we recovered many thousands of pounds of a variety of refrigerants and got to see the inner workings of a beautiful old Stadium, something few people have ever enjoyed. 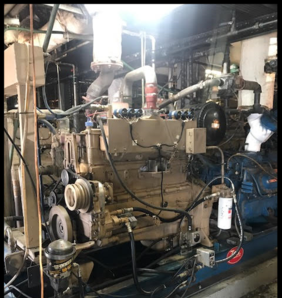 Because the compressors were not designed to compress the nitrogen into a liquid it created a very high head pressure that could rupture the whole system.  We had equipment that was specially designed to remove non condensables such as the nitrogen so we were able to remove the contaminates.